New course construction on the rise 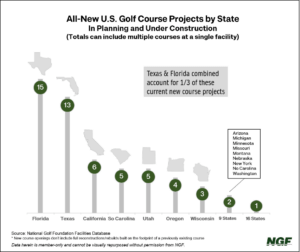 Golf course construction is on an upswing for the first time in 20 years, and while growth is still slow by historical standards, it has brought a sense of excitement to much of the industry.

National Golf Foundation CEO Joe Beditz recently wrote that about this time last year, golf architect Tom Doak started noticing an increase in the number of calls he was getting about designing new golf courses.

Doak is not the only one.

Kipp Schulties, owner of Kipp Schulties Golf Design, said that not only is he seeing more new projects but also he and others in the business are facing challenges in finding construction crews and materials. Course builders, heavy equipment contractors, materials suppliers and other specialists are booked solid for the next two years.

Those numbers pale in comparison to the almost 400 courses that opened in 2000. But this is the first time since then that numbers are going up.

“No, we’re not seeing the beginning of another construction boom,” Beditz said. “We are still in a correction. But this does indicate that the golf business is in the process of turning a corner, with course closures declining and new course construction rising.”

During the past five years, almost three-quarters of new courses have been connected to resorts, high-end communities or private destination clubs. Beditz said most new projects are specialty facilities — a number of them being innovative short courses.

Some geographic areas are seeing more new construction than others, with Sun Belt states being the busiest.

Land availability and relative affordability, coupled with growing populations, are major drivers for this. In fact, NGF estimates that about one-third of all new course projects are in Florida or Texas.

California, which has not seen a new course open in more than five years, has six courses in planning or under construction.

NGF cautioned that not all planned projects will be built. Five years ago, there were 112 projects proposed for construct, but only 77. or 69% of them, were eventually built. The percentage completed may rise, however, given the better economic climate for golf.

By comparison, when golf was…