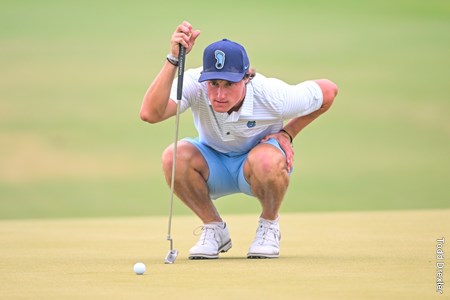 The Jones Cup is one of the top amateur tournaments in the world, featuring 16 of the top 50 players in the current World Amateur Golf Rankings. By virtue of winning, Ford earns an exemption into the 2023 RSM Classic, a PGA Tour event next fall at the Sea Island Golf Club.

Ford was in first place after all three days of the Jones Cup. He led by one shot after round one over UNC teammate Peter Fountain, who finished fourth today after a final round 1-under-par 71. Ford also led by two strokes after 36 holes, but fell behind Surratt by two strokes on the front side in today’s final round.

Surratt birdied the fifth and sixth holes Sunday to pull even and took a two-shot advantage over Ford when he made his third straight birdie on seven and Ford bogeyed the eighth hole.

Surratt was runner-up at 11-under 205, Wake Forest’s Michael Brennan was third at 8 under and Fountain was fourth.

Ford shot 67-68-69, the only competitor in the field of 84 to shoot all three rounds in the 60s. He won the Stephens Cup at Seminole Golf Club and finished second twice and sixth in five collegiate starts in the fall for the Tar Heels.

The Peachtree Corners, Ga., native came into the Jones Cup No. 8 in the World Amateur Golf Rankings. Surratt is No. 12 and Brennan is 20th.