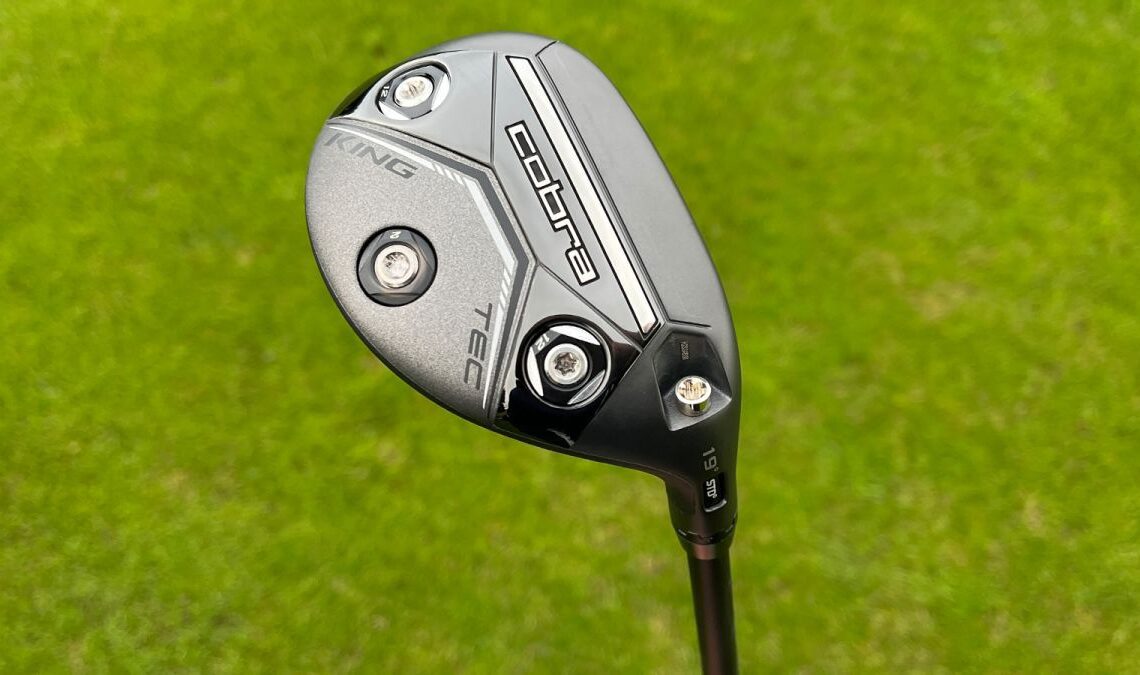 Alongside the Aerojet, Cobra has also released the new King Tec hybrid for 2023. This is the second generation that will come in to replace last year’s King Tec model with a refined shape, H.O.T Face Technology, and a moveable weight system which really helps this hybrid stand out against its competitors.

One of the first things we noticed when looking at the new King Tec hybrid next to its predecessor was how Cobra has done an excellent job in cleaning up the aesthetics. The contrasting grey topline on the previous model has been removed and, while it provided a good alignment aid, the new model with a one-tone matte black finish makes the head look much more compact and will make the new model more appealing to a wider variety of golfers. The carbon crown is lighter and has allowed for weight to be redistributed throughout the head to aid speed and forgiveness and made this one of the most forgiving hybrids we have tested.

The sole looks fairly similar too, with the three interchangeable weights that allow golfers to set the club up to produce a certain ball flight. As standard, the club comes with two 12g weights, although heavier 14g and lighter 10g weights are available through custom orders. This was particularly fun to play around with and as someone who tends to miss to the left, I swapped the weights around and found my ball flight straightened out dramatically even on off-center strikes and was particularly helpful when it came to attacking pins on the right side of greens.

Thanks to the H.O.T Face Technology and Pwrshell design even miss-hits were managing to keep up with the well-struck shots. The variable thickness pattern design allows for more consistent speed and spin across the face, meanwhile, Pwrshell face insert delivers fast ball speeds and high launch through more flexibility in the face. All of which also feature in the new Cobra Aerojet Hybrid.

We were honestly blown away with how hot the King Tec hybrid felt off the face and the data gathered by a GCQuad Launch Monitor while using Titleist Pro V1x golf balls backed up our suspicions. With average ball speeds of 149mph and an average carry distance of 244 yards it not only outperformed the King Tec 2022 model but also was longer than any other hybrid we tested this year. In fact my only criticism of the club was that It actually went too far for the gapping of my clubs at the top end of the bag,…