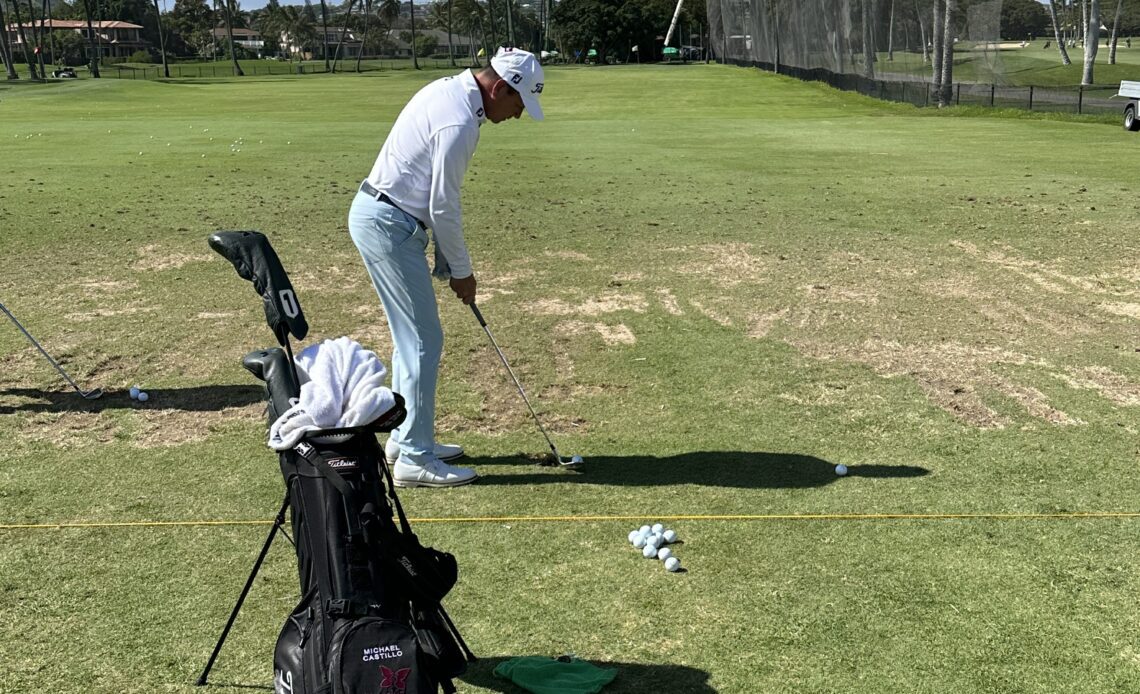 HONOLULU — Michael Castillo should be coming off a stretch of 12-hour work days for the past three weeks. As head golf professional at Kapalua Resort’s Plantation Course, Castillo was busy hosting an elite field of 39 pros at last week’s Sentry Tournament of Champions.

This week, he’s among a field of 144 pros at the Sony Open in Hawaii. He played nine holes on Tuesday with former Masters champion Adam Scott and had several of the same pros that he doted upon just days ago asking him on the range, “What are you doing here?”

Castillo won the Aloha PGA Section in September, making three birdies in his final seven holes, including at 18 to qualify for his first PGA Tour event. It’s even more special because Castillo grew up on the island and his dad, Ronnie, was an assistant pro at Waialae Country Club in the 1970s, and Michael and his three brothers grew up working at the course. (Brother Joey was an assistant here, too.)

“Some of the guys I worked with in high school are still employed at the club,” Castillo said.

If that wasn’t enough to make it a special week, Castillo has dealt with colon cancer and didn’t see this day coming. At 60, he is believed to be the oldest first-time competitor at an event that has seen teen sensations such as Tadd Fujikawa and Michelle Wie compete in the tournament.

“I thought the opportunity had passed me years ago,” he said. “It’s even more special to qualify when you’re not supposed to, but that’s the game, right?”

Michael Castillo warms up for his PGA Tour debut at age 60 at the Sony Open in Hawaii. (Adam Schupak/Golfweek)

The game is life to the Castillo family, which is Hawaiian golf royalty. Castillo’s father, Ronnie Sr., 86, began caddying at Waialae at age 12 and became head professional at Hawaii Kai Golf Club on Oahu, among other places. Through hard work and a passion for the game, he rose to become vice president at the PGA of America, and qualified for the 1976 PGA Championship as well as 10 Hawaiian Opens. Brother Ronnie Jr., a club pro in Tennessee, played in the tournament four times himself and Joey, who is caddying for Michael this week, is the Ping equipment rep for the state of Hawaii. But Michael’s sister Lori is the most decorated golfer in the family, winning the U.S. Girls Junior Championship and the U.S. Women’s Public Links twice in 1979-80. At the time, she was the first female and one of only four golfers — Chick Evans, Bobby Jones and Jack Nicklaus…