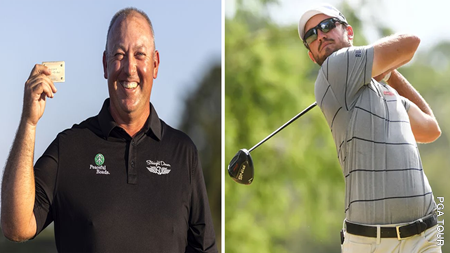 
Scott Gutschewski and Brandon Crick, two former Huskers, will make their 2023 professional debuts as members of the Korn Ferry Tour competing at the Bahamas Great Exuma Classic at the Sandals Emerald Bay Course on January 15-18.

Gutschewski, who will be making his 234th career professional start, is an Omaha native and led the 1999 Husker squad to a 14th place finish at the NCAA Championships, completing one of the best careers in Nebraska history. He spent 2022 as a member of the PGA TOUR, his sixth season on the circuit. He also competed in five Korn Ferry Tour events in 2022, notching one top-25 performance with a 16th place finish at the AdventHealth Championship in Kansas City, Mo. in May 2022.

Crick, the 35-year-old native of McCook, turned pro in 2010 after a stellar career at Nebraska. During his time on the Husker golf team, he earned a berth to NCAA Regionals as an individual, doing so in 2010. He returned to the University in 2015, earning a degree in sociology. He has competed on the Korn Ferry Tour for six seasons and will also be making his 2023 debut at the Great Exuma Classic. Crick competed in this same event last year, finishing T-19th with a four-round score of 284 (-4). He enjoyed one of his best professional seasons in 2022, setting career-bests with a 54th place finish in the Korn Ferry Tour standings along with seven top-25 finishes. In addition to his accomplishments on the Korn Ferry Tour, he also competed in his first major at the U.S. Open, where he failed to make the cut.

The Bahamas Great Exuma Classic Live Scoring can be found here. This tournament, along with every other Korn Ferry Tour tournament this season, will compete for million dollar purses while traveling all throughout the world. To follow along with Gutschewski and Crick along the way, you can follow along with them on their social media below.