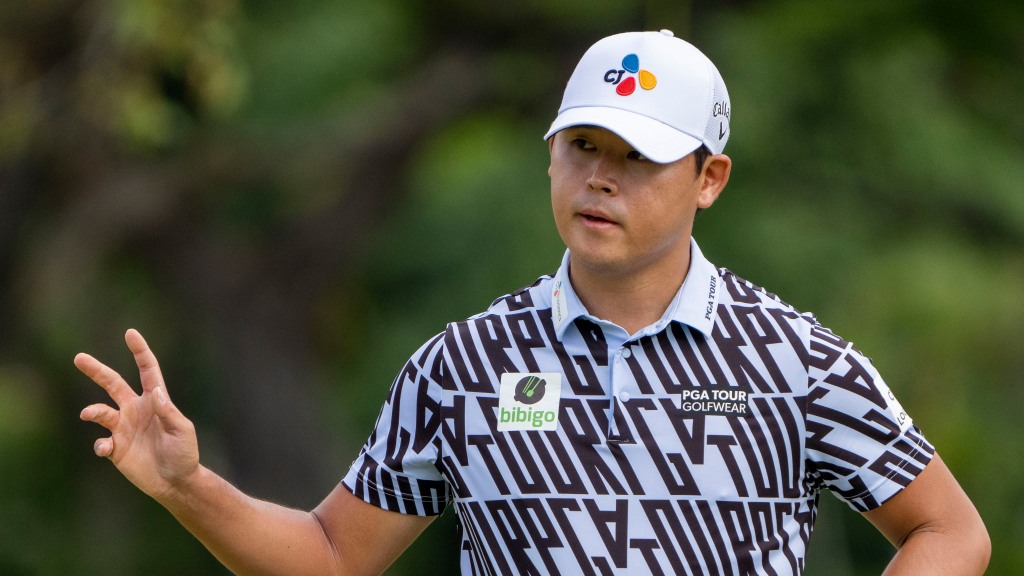 Si Woo Kim picked a great time to chip in for birdie at the Sony Open in Hawaii.

“It can’t get better than this,” Kim said.

The 27-year-old South Korean tied for the lead with a dramatic chip-in birdie at the par-3 17th and added a two-putt birdie at 18 to match the low score of Sunday’s final round.

Kim’s 6-under 64 at Waialae Country Club in Honolulu propelled him to a one-stroke victory over Hayden Buckley and his fourth PGA Tour title. It’s an impressive tally but Kim still has work to do to catch his bride, Ji Hyun Oh, who turned professional in 2014 and has seven wins on the KLGPA to her credit. The couple tied the knot on December 18.

Kim said he was going to approach the final round of the Sony Open with a different mindset, trying not to focus so much on winning the tournament.

“Just play the golf,” he said.

Whatever that entailed, it worked. Kim came out firing with birdies on the first three holes and marked six circles on his card in his first 12 holes to assume a one-stroke lead over Buckley.

In September, Kim, a South Korean native, represented the International team in the Presidents Cup. After playing a practice round with teammate Adam Scott, he adopted Scotting putting style and use of a broomstick-length putter that week. Kim also knocked off Justin Thomas of the U.S. in a singles match. Kim tried to downplay the significance of his victory over Thomas, calling it “just a lucky day,” but later conceded it gave him a boost of confidence.

“My game was little down like at the end of the season, but I think that kind of like gave me momentum,” he said.

On Sunday, Kim chased down Buckley, the 54-hole leader, who started with a birdie but then his putter cooled off and he made his first bogey of the day at No. 11 to fall one stroke behind Kim. Buckley’s putter temporarily woke from its slumber as he holed a 17-foot birdie at 12 and a 29-foot birdie at 14 to vault into first. At 15, Buckley lipped out a 4-foot par putt on the left to drop back into a tie for the lead at 15 under but bounced back with birdie one hole later.

Buckley buried a 16-foot birdie putt at 16 to reclaim the lead and just when it appeared that Buckley had the edge to grab his first title, Kim answered with his dramatic chip-in from just over the 17th green. His celebratory fist pump rivaled that of Tiger Woods in his prime.

“Right before that I heard the noise, I knew he made it,” Kim said of Buckley’s birdie putt at 16. “It was a…