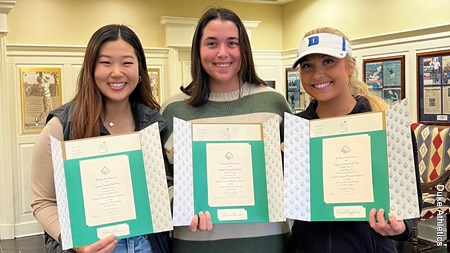 
DURHAM – The Duke women’s golf program will once again be well-represented at the Augusta National Women’s Amateur (ANWA) as the Blue Devil trio of Phoebe Brinker, Anne Chen and Erica Shepherd received invitations this past week to compete March 29 through April 1 in Augusta, Ga.

Beginning the week prior to the Masters Tournament, an international field of women amateurs will compete over 54 holes of stroke play. A cut will take place after 36 holes, advancing the leading 30 players to the final round at Augusta National Golf Club. In the event of a tie after 54 holes, the winner will be decided by sudden-death playoff.

The first 36 holes will be contested over two days on the Island and Bluff nines at Champions Retreat Golf Club in Augusta, Ga., March 29 and 30, 2023. The entire field will then play Augusta National for an official practice round Friday, March 31. The final round will take place at Augusta National on Saturday, April 1 and will feature the top 30 competitors who made the cut.

Over the four years of action, Duke will now have 13 spots taken up by Blue Devils that will compete with the other top amateur golfers in the country.

Seeing action in the ANWA for a fourth time, Shepherd has carded a tied for 16th finish in 2021 and tied for 21st placement in 2019.  Brinker will appear for the second time and Chen will make her debut in 2023.

Shepherd was one of nine golfers that made the cut in the first two ANWA events.