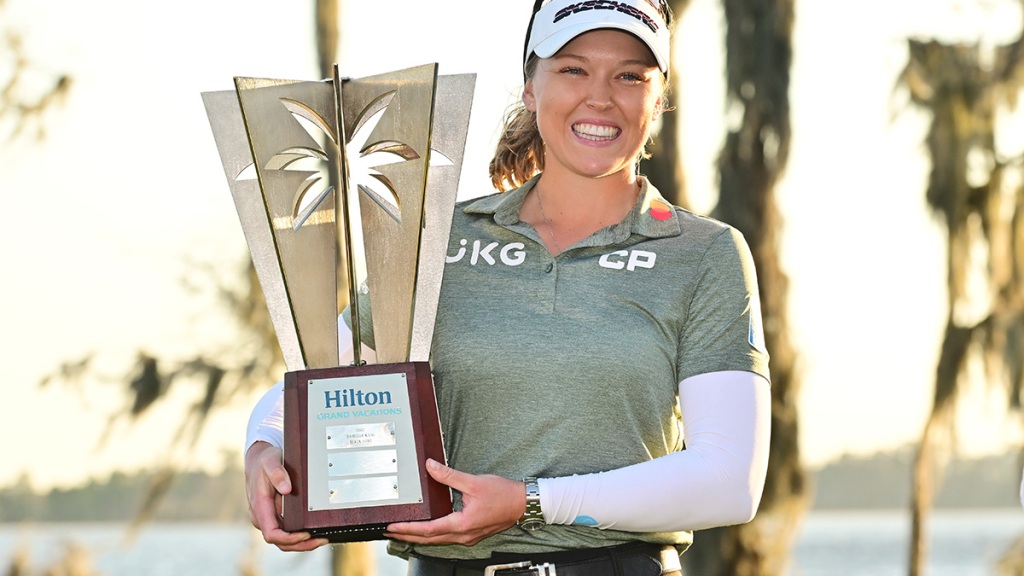 Brooke Henderson began her ninth season on the LPGA with a statement victory at the Hilton Grand Vacations Tournament of Champions.

After holding the 36-hole lead on three different occasions at this event, she finally closed the deal with a four-stroke victory at Lake Nona Golf and Country Club.

The lifelong Ping player quickly put to bed any questions that an equipment change might have on her year, collecting another LPGA title in her first week with a full bag of TaylorMade clubs. She now owns 13 LPGA titles, including two majors, putting her 14th on the all-time wins list, tied with Jin Young Ko and Stacy Lewis. The TOC marked her third time winning an LPGA event wire-to-wire. She has won in eight of her nine seasons on the LPGA. (She did not win in 2020.)

“I always try to win a couple times each year,” said Henderson, “so to get one right way out of the gate takes a little bit of pressure off.”

At 25 years old, Henderson is a young veteran still waiting to take that next step of becoming World No. 1 or claiming a Rolex Player of the Year award. She has long been a force on the LPGA but has never been on top of the world.

With three victories in events in her last 13 starts, including the Pelican Women’s Championship, which she withdrew from with an upper back injury, she’s certainly positioning herself to raise the bar. She has now posted 16 consecutive rounds under par on tour.

“A lot of things have gone really well,” said Henderson. “I’m always trying to get a little bit better and chase bigger goals. Hopefully more victories are to come. Yeah, just small steps, and hopefully it pays off in the long run.”

While a number of top players who live in Asia and Australia skipped the TOC, Henderson held off the likes of Nelly Korda, Nasa Hataoka, Charley Hull and the up-and-comer Maja Stark to claim the first title of the year. She earned $225,000 for her efforts.

Tennis player Mardy Fish won the celebrity division for a second time, smashing the field by finishing 16 points ahead of former MLB pitcher Mark Mulder in the Stableford scoring format.

Henderson closed with a 2-under 70 on a windy, sun-splashed day in Orlando to finish at 16 under for the tournament. Hull birdied the 72nd hole to shoot a fourth consecutive 69 and move into a share of second with Stark, the young Swede who won an LPGA/LET co-sanctioned event in Northern Ireland last year to earn her card.

Stark said she still feels like an underdog walking around at…