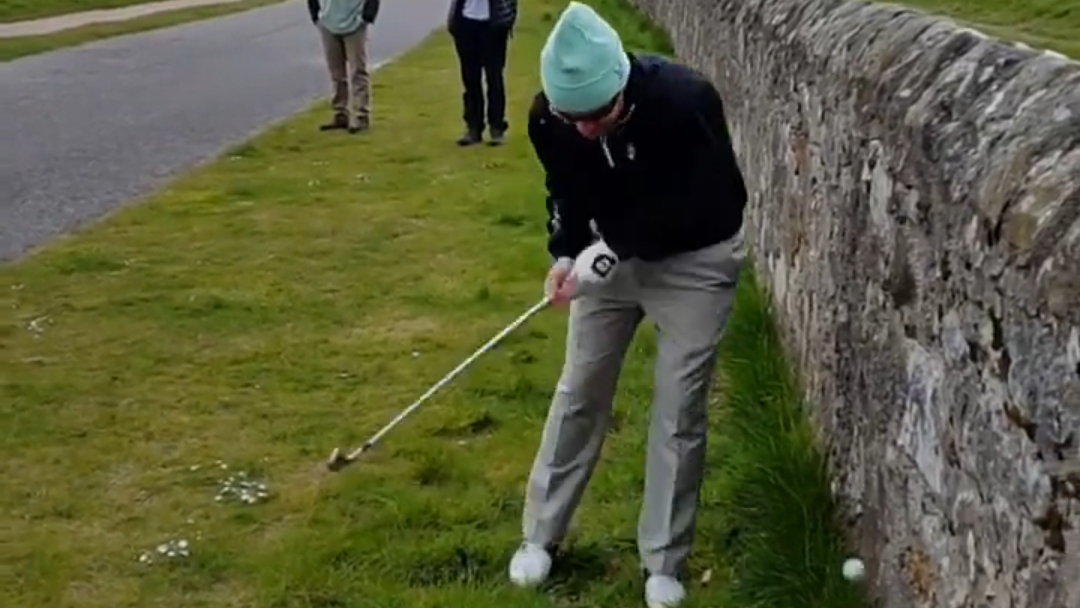 There is surely plenty of wisdom in the saying, “if at first you don’t succeed, try, try again.” Try telling that to the player caught on video in a battle with his new nemesis – the stone wall that runs along the back of the green at the Road Hole on the Old Course at St Andrews.

No doubt the player had something far different in mind as he approached one of the most well-known holes on the planet. Perhaps watching his tee shot sail over the Old Course Hotel to settle comfortably on the fairway, or maybe flirting with danger near the notorious pot-hole bunker in front of the green on his way to an inevitable birdie before striding confidently onto the 18th.

Instead, he found himself close to the famous wall that runs alongside to the right of the fairway on the other side of the road that gives the hole its name. No problem – simply summon the memory of Miguel Angel Jiminez at the 2010 Open, ricochet the ball onto the wall and gracefully take the applause as it loops onto the green. Fate, unfortunately, had other ideas – and, to make matters worse (for him) there was a small crowd and someone videoing to witness his imminent ignominy.

After a couple of practice swings, the player’s big moment arrives – he duly strikes the ball against the wall from a couple of feet or so, only to see it almost apologetically loop back then trickle closer to the wall than before.

After the groans subside, the determined player presses on, and his second attempt seems far more promising. There is genuine trajectory as the ball heads encouragingly in the direction of the green. At that moment, a man can even be heard calling: “There we go!” – until the ball takes one bounce on the road separating peril from safety and opts for peril, this time so tight against the wall it’s unplayable. At this point, the audience – and the player, who takes his epic fail in good spirits – fall into fits of laughter, and he finally takes the drop.

Naturally, the video has caused a stir on social media, with some suggesting he should have taken the drop, or even just play towards the green in the first place. One response even shows how it should be done:

Alas, it wasn’t to be. Of course, the player is far from the first to fall victim to the Road Hole wall – he can at least take some comfort knowing he won’t be the last.