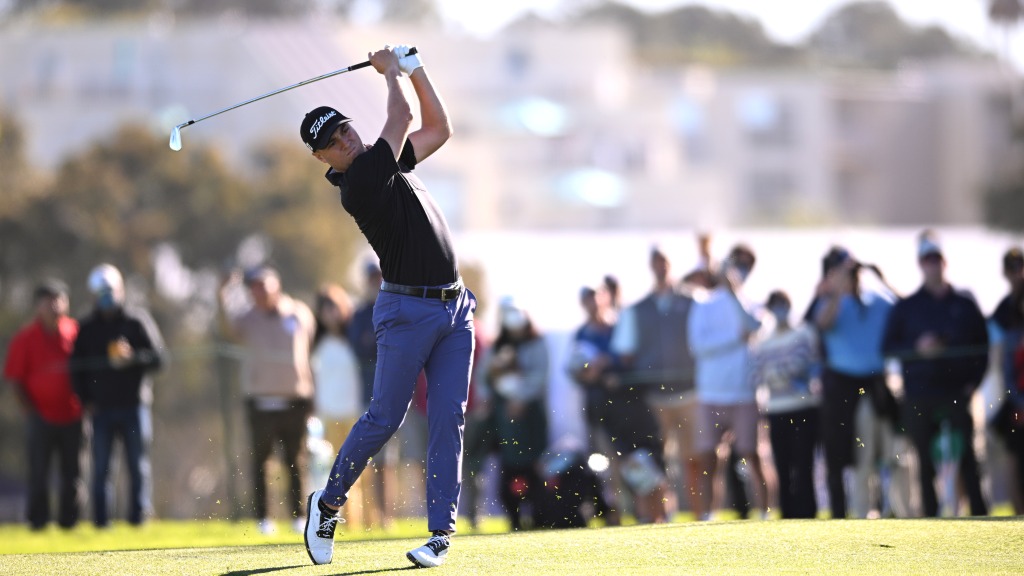 Justin Thomas is teeing it up for a second time in 2023 this week at the Farmers Insurance Open.

He’ll no doubt be looking for a better finish than the tie for 25th he posted in the 38-man field at the Sentry Tournament of Champions.

“Hawaii is always the start of the calendar year schedule-wise, but there’s something about the west coast,” he said Tuesday. “I feel like once you get to Torrey Pines it really gets going.”

The Farmers has a Saturday finish (and a Wednesday start) for the second straight year so as to avoid going head-to-head with the NFL’s AFC and NFC Championship games Sunday.

Thomas admitted he really likes the schedule tweak, which he took full advantage of in 2022.

“It was incredible. I got to watch football on Sunday. I was ecstatic about it. Even so much so that I pushed the Tour that we do it during the entire playoffs because I love football and I love watching football,” he said. “It’s easy for me. I mean, I’m not playing the previous week so I just come in Sunday versus Monday. … the weirdest thing is just actually, out of habit, you know, the cut’s after Friday, the final round’s Sunday, so it’s just little things.”

As it turns out, the NFL team he roots for the most is among the final four.

“The Bengals,” he said. “They’re the closest to home in Louisville growing up. My mom’s from Pittsburgh and my dad’s from Ohio, is a Bengals fan, so we would going to the Bengals-Steelers game every year growing up.”

Thomas did admit it’s not his favorite team in all of football.

“I’m not a die-hard, it’s not like Alabama football where I live and die with, but it’s a fun team to root for. I hate to say that I love [LSU alum] Joe Burrow because he took a beating to my Crimson Tide, but it’s hard not to like him and root for him and just be optimistic about what he’s done with the Bengals.”

Thomas, who posted a tie for 19th in the 2021 U.S. Open held at Torrey Pines, tied for 20th a year ago in the Farmers but prior to that, he skipped the San Diego stop for six straight years. In 2015, he missed the cut. His only other appearance was in 2014 when he tied for 10th.

“When I first played I struggled with the North Course, it just didn’t fit my eye. There’s definitely a number of holes that are still difficult and maybe not totally comfortable to my eye, but I feel like with the changes, it’s not a place that you need to go shoot 67 on, 66 to keep pace,” he said….