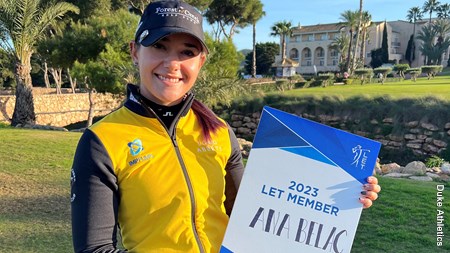 
MURCIA, Spain – Coming off earning her 2023 LPGA Tour card at Q-Series earlier this month, former Duke women’s golf standout Ana Belac captured her Ladies European Tour card for the upcoming season this week by turning in a 13-under, 348, at the Real Golf La Manga Club in Murcia, Spain.

Belac, a product of Portoroz, Slovenia, registered rounds of 68, 69, 73, 71 and 67 over the last five days to finish fourth with a 13-under-par ledger.  She was only two strokes behind the leaders, Polly Mack and Alexandra Forsterling (346).

“It has been a great week,” said Belac. “Q-School can be really tough and mentally challenging; we try to have fun out here and enjoy the beautiful views and weather as much as I could.  I started the week bogey-free and finished the week bogey-free, that’s always a huge positive. My game is coming together.”

The round of 67 on Wednesday was the low score of the day, which included an eagle on No. 18.

“[On the eagle] I had a comfortable 5-hybird into the green and my dad nearly talked me out of going for the green in two. I hit it in the bunker – not the best shot – and then I holed out from the bunker.  It’s really crazy because that shot would’ve intimidated me a couple of months ago, but I really spent a lot of time working on my game, especially around the greens, so that’s paid off.”

For finishing in the top-12, Belac earned Category 12 membership on the Ladies European Tour, which should get her into all tournaments in 2023.