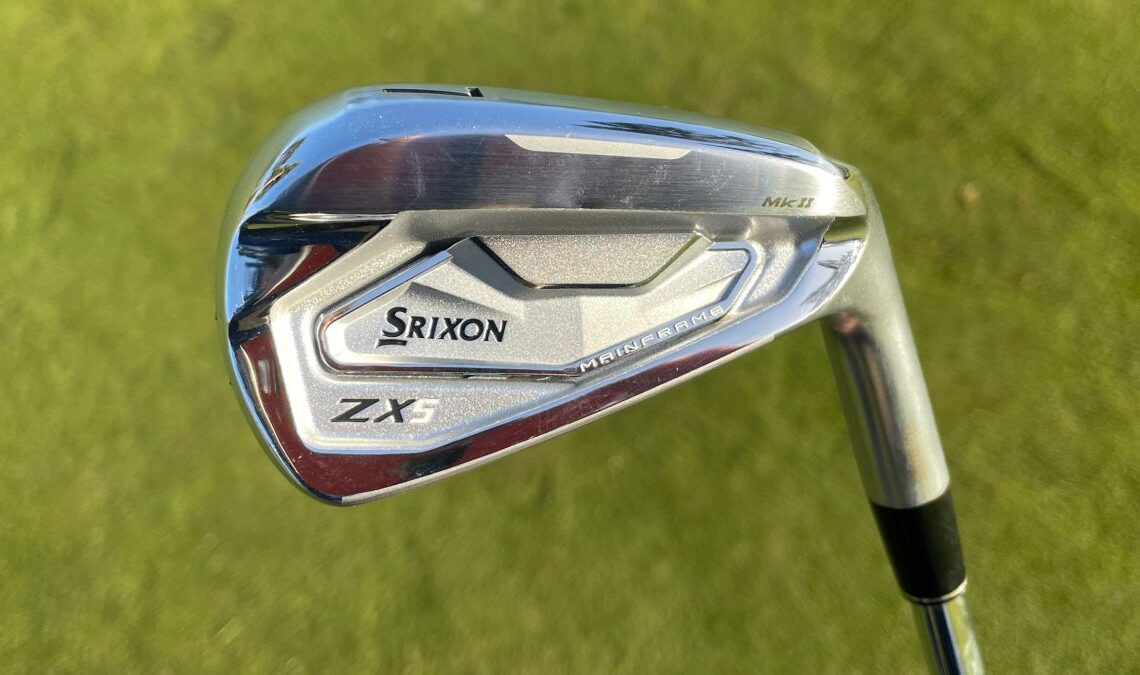 Srixon’s previous ZX5 iron was as close to the perfect all-rounder as any manufacturer had got to, so the brand didn’t need to reinvent the wheel in creating its replacement in the new ZX5 Mk II iron. Versus the old model, the new one looks busier on the back – boldly advertising the updated MainFrame design, a variable thickness pattern of grooves, channels, and cavities said to maximize face flexing at impact.

Slotting in nicely between the ZX4 Mk II and ZX7 Mk II, it is billed as a forged iron offering enhanced distance. It does this partly through it’s lofts (the 7-iron comes in at 31°) as well through size. It’s a beefed up version of the excellent ZX7 Mk II but still has a compact appearance that will appeal to the better player looking for a little more forgiveness on their approach shots.

At address, the shape, size and finish are hard to fault. As a result, it looks really inviting to hit and while some might say there’s too much offset, the other redeeming features mean you soon forget about this minor detail.

Testing indoors on the Foresight Sports GCQuad launch monitor with Titleist Pro V1 2021 golf balls produced predictable performance results. It really did slot in perfectly between the ZX4 Mk II and ZX7 Mk II in terms of ball speed, spin and carry distance – as the data below highlights. It was probably closer to the ZX4 Mk II than it was the ZX7 Mk II, providing competitive distance with plenty of height to ensure the ball stops on the green when it needs to.

I think what golfers will enjoy most about this iron is the feel. It offers up a hint of softness but there’s much more ‘zing’ off the face than there is on the ZX7 Mk II making it the best golf irons for the impact experience it offers. That said, the distances weren’t as consistent off-centre as we’d have liked. Carries varied from 166-174 yards – we’d have liked the front to back dispersion to be tighter, but the spin stayed pretty consistent throughout.

The turf interaction impressed too – in wet conditions you can feel the Tour V.T. sole at work keeping the leading edge up as it goes through the ground. It’s subtle, but hit a flat soled iron straight afterwards and you can feel the difference. It’s worth pointing out the strong potential to combo this iron with the ZX4 Mk II or ZX7 Mk II irons within a set, depending on where you need the most help.