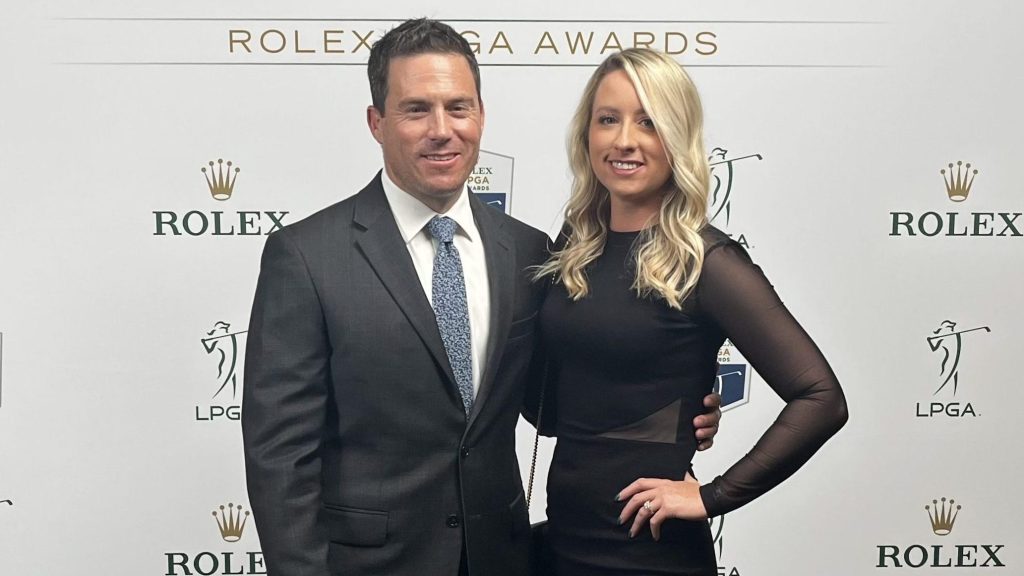 The first time Jodi Ewart Shadoff met her husband Adam was during her sophomore year at the University of New Mexico. Adam, a local TV reporter, interviewed Jodi after that first round in Albuquerque, and as the young Englishwoman kept playing well, they kept talking.

That conference victory eventually led to a date that led to a lifetime of conversations. But after college, the next time Adam found himself working a tournament with Jodi in the field was last week’s Hilton Grand Vacations Tournament of Champions in Orlando. Adam, a sports anchor and reporter at FOX 35 Orlando, came out to media late last year at Lake Nona Golf and Country Club.

Jodi, who won for the first time in her 246th start last year at the Mediheal Championship to qualify for the TOC field, was part of the pre-tournament interview panel. At the end of the session, a colleague in the room asked, “Nothing from you Adam? You’re not going to ask a question?”

Adam looked to his wife and jokingly asked, “Who’s the best sports anchor in Orlando?”

The Shadoffs, who recently celebrated their 10th wedding anniversary, live less than 25 minutes from Lake Nona. Jodi, who plays out of the Ritz in town, isn’t a member at Lake Nona, which was the case for several in the field, but this was as close to a home game that she could hope for. In fact, when Shadoff finally broke through with her first victory last year in California, the TOC was one of the first things that came to mind.

“It’s pretty pure,” said Shadoff of Nona. “It’s probably one of the best courses we get to play all year, in my opinion.”

In the second round, she played alongside Brian Urlacher, a fellow Lobo and NFL Hall of Famer. It was the first time the two former UNM standouts had met.

Two of the best @UNM athletes of all-time and @UNMLOBOS Hall of Famers paired together at the @LPGA @HiltonGrandVac #HGVLPGA.@BUrlacher54 Brian Urlacher@Jodi_Ewart Jodi Ewart Shadoff pic.twitter.com/TuoSWUbvdS

Adam wasn’t working in the studio the day Jodi won the Mediheal. He thought about flying out for the final round to surprise Jodi.