Tom Kim opens up on his first encounter with Tiger Woods 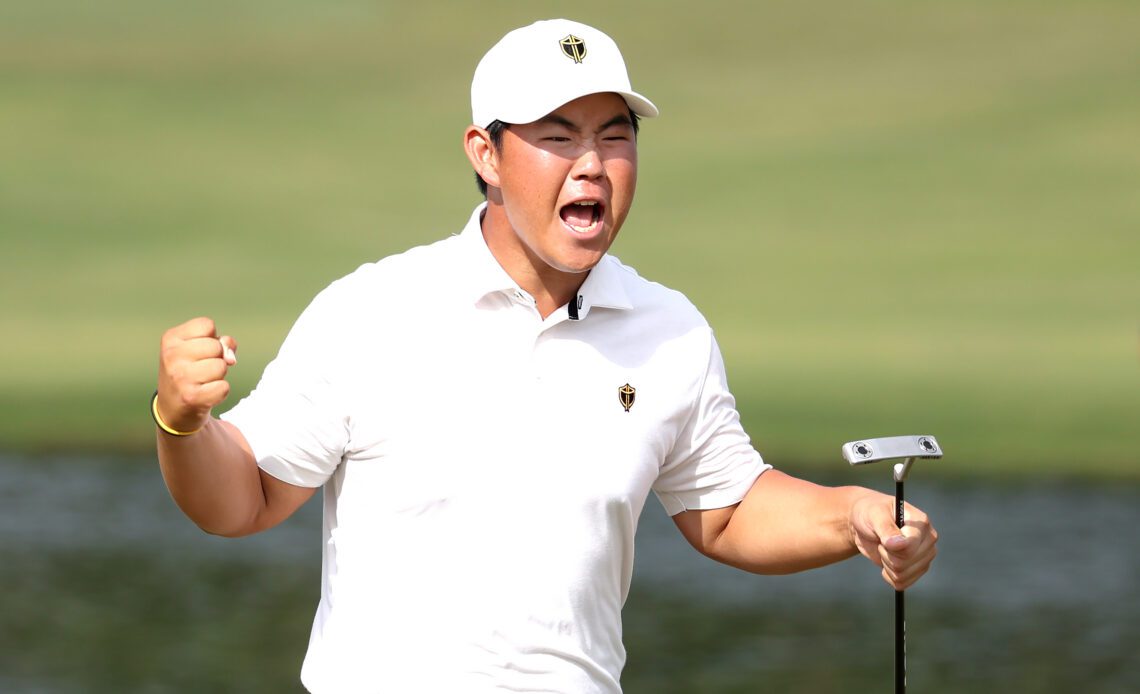 KAPALUA, Hawaii – When Tom Kim was five or six years old, he remembers being at a golf tournament in Australia and traipsing after Tiger Woods – stopping just short of following him to the bathroom.

“I had my TW cap on and it was so big because I had a small head at that time and it didn’t fit. But he was walking literally three feet in front of me and I shouted, ‘Go, Tiger’ and (he) tipped the cap and went in the bathroom,’ ” Kim recalled, “and literally thousands of people started running to the bathroom waiting for him to come out. But that was my first interaction with him.”

Did Kim join the masses of spectators following Tiger as he sought relief?

“I did not,” Kim said with a smile. “I wanted to give him his privacy.”

Kim, 20, is one of golf’s rising stars, having notched two wins on the PGA Tour since August and climbing to No. 15 in the Official World Golf Ranking. As the breakout star of the Presidents Cup in October, Kim is becoming a fan favorite who is drawing the attention of an adoring public. While not on the level of Tiger just yet, Kim has noticed that his star power is on the rise after a recent visit home to South Korea.

Tom Kim celebrates a putt made by teammate Si Woo Kim of South Korea and the International Team on the 13th green during Saturday afternoon four-ball matches on day three of the 2022 Presidents Cup at Quail Hollow Country Club on September 24, 2022, in Charlotte, North Carolina. (Photo by Warren Little/Getty Images)

“I was out with my friends and before if I would go to the golf course and wear my golf clothes people would recognize me. But if I would be just in average just normal attire not a lot of people recognize me,” he said. “But I felt like every night I went out I at least had a few people kind of come up to me and ask for a picture. So just things like that where I’m with my friends and we’re having a chat and someone comes up to me, you know, they’re like, ‘Well, OK. Like I guess you’ve changed, Tom.’ But I tell them, nothing has changed in my life, really.”

Nothing other than perhaps getting to spend time with his childhood idol, Tiger, at the Hero World Challenge in the Bahamas in December. Kim may be older but he’s still a Tiger fan at heart.

“It was like, man, Tiger’s, like, man, he’s pretty cool,” he said with a laugh. “I’ve seen him a few times, but to be able to kind of just have a conversation with him was pretty amazing. You look at…