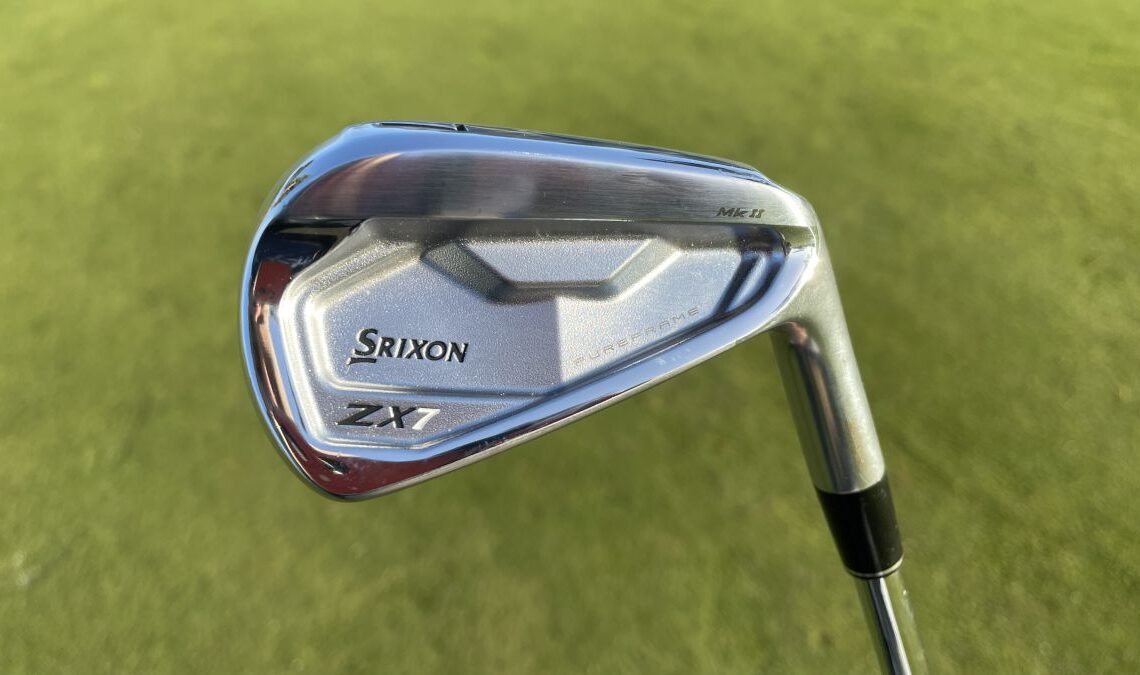 Srixon didn’t need to reinvent the wheel when it came to replacing the prior generation ZX7 iron, such was its popularity among better players and even the best golfers in the world like Ryan Fox and Shane Lowry. The ZX7 Mk II builds upon what made this iron so great by enhancing the impact experience with a more solid, satisfying feel and it does this with its Pureframe design.

Forged into ZX7 Mk II as an 80 percent thicker portion of 1020 carbon steel, PureFrame is strategically placed right where good players typically strike the ball, delivering an elevated impact feel. You can see it clearly on the back of the head but this aside, the aesthetics remain relatively unchanged. That said, it appears the sole has been made a little bit wider while maintaining the Tour V.T. Shaping, which ensures it plays narrower than it looks while getting the head through the turf without losing too much speed. At address is both compact and inviting – it appears noticeably larger than a blade but will still appeal to the eye of low and maybe some mid-handicap golfers.

With a 7-iron loft of 32°, the ZX7 Mk II remains one of the stronger irons for low handicappers on the market and delivers a few extra yards versus its competitive set, which includes the Ping i230 and TaylorMade P770. It does this while producing a soft, buttery feel but with a hint of spring to it. It feels more lively than a blade but the sound is very similar, a little like the PXG 0317 ST Blades there’s a lot to like about the sensations you experience at the point of collision.

It perhaps lacked off-center forgiveness at times. While the target golfer for this iron shouldn’t need to utilise a large portion of the face, it didn’t feel as stable as we’d have liked when we made a poor swing and this was reflected in the drop offs we saw in the carry distances. This wasn’t helped by the flatter ball flight, which seemed to exaggerate the effect of mishits.

For very good players with fast swing speeds that don’t often miss the middle of the face, this iron may well send the ball further than you’re accustomed to, which will create some distance gapping headaches. Through custom, you can likely configure the set slightly weaker or switch into the Z-Forged II irons, the blade offering from Srixon in 2023 that has more traditional lofts.

Besides the enhancements in the feel, this iron doesn’t move…