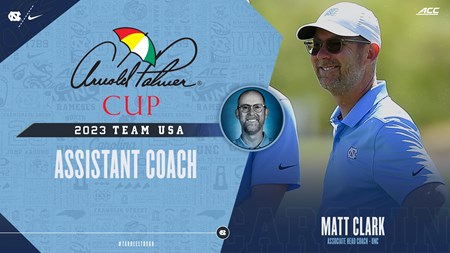 
Matt Clark, associate head coach of the Carolina men’s golf team, will serve as an assistant coach for the United States team in the 2023 Arnold Palmer Cup, which will be played June 8-10 at Laurel Valley Golf Club in Ligonier, Pa.

Kortnie Maxoutopoulis Barrett of San Jose State will join Clark on the U.S. staff, with Minnesota’s Rhyll Brinsmead of Australia and Tennessee’s Brennan Webb of Canada serving as the international squad’s assistant coaches.

Clark won the 2022 Jan Strickland Outstanding Assistant Coach Award. He is in his sixth season in Chapel Hill and first as associate head coach. The Prattville, Ala., native has coached 10 PING All-Americas, six Srixon/Cleveland Golf All-America Scholars and two ACC Freshmen of the Year while at North Carolina. After a playing career at South Florida (1993-94) and Alabama (1995-97), Clark began his coaching career as an assistant coach for six seasons in Tuscaloosa, where he worked for Palmer Cup alumni and GCAA Hall of Famers Dick Spybey and Jay Seawell. A four-time conference coach of the year at UNCW and Georgia State, Clark led the Seahawks and Panthers to a combined 16 team titles, including five conference championships, and a total of nine NCAA regional appearances.

Clark and head coach Andrew DiBitetto have led the Tar Heels to 13 team titles and five straight appearances in the NCAA Championship, the sixth-longest streak in the nation. UNC has won the stroke play portion of the past two ACC Championships and advanced to match play and finished in the top five in the 2021 and 2022 NCAA Championships.


The Arnold Palmer Cup was co-founded by Arnold Palmer and the Golf Coaches Association of America (GCAA) and began at the Bay Hill Club & Lodge, Orlando, Fla., in 1997. The event is a Ryder Cup-style tournament featuring the top men’s and women’s university/college golfers matching the United States against a team of international players. The Palmer Cup has been played at some of the world’s greatest courses, including The Old Course at St. Andrews, The Royal County Down, Royal Portrush, Baltusrol, The Honors Course, and Cherry Hills. Beginning with the 2018 matches at Evian Resort Golf Club, the Palmer Cup is the only major tournament which features men and women playing side-by-side as partners.