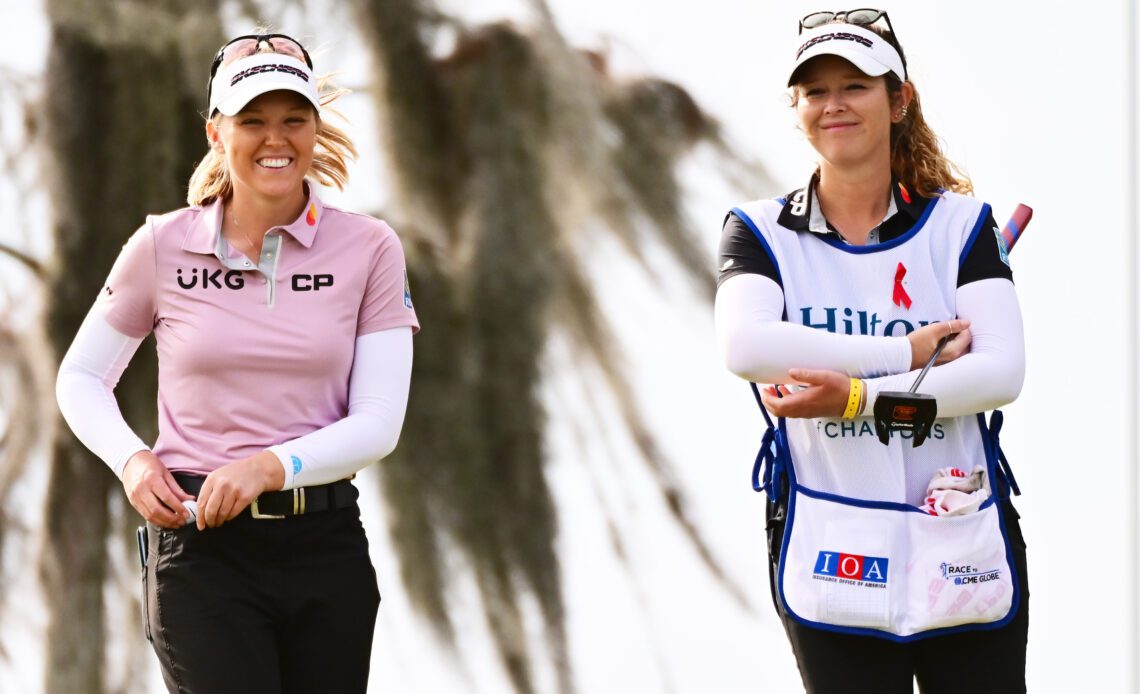 ORLANDO, Florida — Annika Sorenstam put together her first bogey-free round in more than a decade to open the Hilton Grand Vacations Tournament of Champions, where she leads the celebrity division. Caddie Mike McGee was quick to point that out to his wife after her round.

“Obviously I’m very pleased,” said Sorenstam, who amassed 39 points in the Stableford format after shooting 3-under 69 at her home course, Lake Nona Golf and Country Club.

Sorenstam, who lost in a playoff here last year to World Series champion Derek Lowe, leads Mardy Fish by two points. When the 72-time LPGA winner was asked whether she finds herself checking out the LPGA side of the board from time to time, where Brooke Henderson leads after a 5-under 67, Sorenstam replied: “Of course.”

“I’m competitive, but it’s not like I look there and say, I wish I was there,” she said. “I’m very happy where I am.

“But the competitive part doesn’t go away.”

Brooke Henderson reacts with caddie Brittany Henderson after making her putt on the 18th green during the first round of the Hilton Grand Vacations Tournament of Champions at Lake Nona Golf & Country Club on January 19, 2023 in Orlando, Florida. (Photo by Julio Aguilar/Getty Images)

After competing in the PNC Championship with son Will last month, the family jetted off to Tahoe for several weeks of skiing at their second home. The early part of the year has been filled with foundation work, with the Hilton Grand Vacations Annika Invitational wrapping up a few days ago.

Ashleen Kaur made a 40-foot downhill putt for eagle to win by one, and with her victory, received a spot to compete in this week’s field.

“I saw her this morning, and her dad is like joy,” said Sorenstam, beaming herself. “That’s what we want to provide is amazing experiences that they won’t forget. Very happy for her.”

Sorenstam played alongside TOC rookie Gemma Dryburgh on Thursday. The Scot told Sorenstam that she competed in her junior tournament when she was 17 years old.

“So it was pretty crazy looking back now and now playing with her in an event, said Dryburgh. “Very cool. I asked her a few questions. Hopefully I didn’t bombard her too much, but wanted to soak up as much information as I could.”

While Sorenstam didn’t get as much preparation time as she would’ve liked coming into this event, she does have new Callaway clubs in the bag.

After she put a new Paradym driver in the bag and found an extra 8 yards,…